Scenes Softened and Back-lit By Memory

Today my wanders through the algorithm brought me to some haunting and lovely photographs.  The first, a black and white, ethereal photo of Casino Pier remnants after Hurricane Sandy.

A similar picture was one that we all saw on the news, night after night when the destruction of Sandy was astonishingly horrible and yet magnificent at the same time.

A roller coaster gone out to sea;  a massive tanker sitting in a neighborhood;  a airline runway underwater;  streets covered in several feet of sand; and a canoe washed into someone’s living room.  They all showed Sandy’s power and nature’s ability to change everything in a few moments.  They are iconic.

But these photos by Michael Massaia are not about hurricane Sandy.  They are ‘Scenes From A Childhood’ and the destruction of Sandy is softened by technique in a way that  is how our own memories are softened, and back-lit by memory.

I invite you to go take a look at his photos:  Scenes from a Childhood by Michael Massaia.   See if they touch you and if by looking at them, scenes from your own childhood don’t come to you.  I know I thought of a handful of very specific memories, that are etched in my mind with an ambience similar to these photos!

I thought, if I was to pick 5 iconic, almost mythical, legendary photos of my childhood, what would they be?  They came to me immediately.

I went to kindergarten in Galena.  We lived on High Street.  Which was, well, high!  Galena is built into a hill and we were up there!  Rather than walk all the way around the town, there were series of steps to get you from main street up if you were on foot.  At the time, all day long, my mom and I were on foot and we would go down to town for groceries etc.  I was only a kid and a LITTLE kid and the stairs!  Oh my the stairs.  I thought there were hundreds of them and I would whine and complain the whole way home. 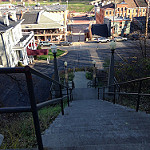 My mother was not amused, either by the whining or the stairs.  I remember going down one day in the winter and we thought we would die before we got back home.

At the time, the kindergarten shared space with the high school, the old high school just up these stairs.  So imagine as a small kindergartner walking into a high school.  Everyone was sooo tall!  The lockers were IMMENSE!

I walked to school.  It wasn’t far but was a decent walk.  I walked past a house with a stone wall at the sidewalk and bushes above that.  Seemed like a castle looked in there.  I didn’t live there long because by first grade we were back in Chicago.  But the time I was there is etched in my mind.

A couple years ago I happened to be in Galena and decided to take a look at the stairs and the school and see if I could find the house.  Found it immediately!  It was just where I remembered it and looks just like I remember it.  The house, the yard all looked the same except for one little difference in perspective!

I was very short then.  The yard was built up so it’s about 2 feet above the sidewalk.  I remember it being much higher!   I took a walk over the the school.  I knew just how to go but it wasn’t very far at all.  Just around the corner, in fact.  But as I walked the sidewalk, I realized I was walking past a house with a stone wall out front.  It was about 2 feet tall, not quite the fortress I recalled!  So things seems much bigger to me then.

So I wondered if maybe the stairs were also a little stretched by memory.  But no!  I thought there were 100 steps and there certainly are!  Here is a picture of the High School Steps in Galena.   The stairs I remember were not wooden but they were as plentiful!  They have recently been rebuilt and are lovely but there are still just as many!  In my memory, Galena is winter and the photos would all be black and white!

My next memory would have to be Ireland.  For many reasons, here in Chicago my parents were very protective and I wasn’t allowed to go off on my own, time were strict as to coming and going etc.  In the height of summer, I would have to be home at dark which in Chicago, would be about 8:30.  Some of the other kids got to stay out later and play an all-block-all-age hide-and-seek game but not me.  I had to get home.

So the first time I was in Ireland, it was a dream.  First of all, summer nights lasted forever.  It doesn’t get dark there till nearly midnight!  And my parents didn’t get home that often so my aunt’s house turned into visitor’s central.  Every night people were in visiting and telling stories and laughing.

I’m a city girl and my aunt had chickens, ducks, turkeys, [no geese, I wonder why?], cows, pigs, a donkey, a dog and cats and I loved them all!  Well, maybe not so much the pigs!  Astonishingly, they ALL, all ate potatoes.  I loved every minute there and it was all the more magnificent by the fact that my parents felt comfortable with me wondering around on my own.  I could go to my friend’s house.  They would go off to town for the day and I’d stay behind.  Being home by dark had a whole new meaning.  I usually was too tired to stay up till dark!

One night, the night of the memory etched in my mind, sums that trip and all memories of Ireland for me forever.

It was night.  The moon was up so hell, it must have been 1 in the morning!  I went outside and out in front of my aunt’s house was a wall.  It was about 6 foot tall.  It was whitewashed.  The night, the moonlight just made the wall glow so I went out and climbed up on top of it and sat and looked back at the house.

My view:  Nephin mountain a looming gray shadow against the moonlit sky.  Then my aunt’s house with all the windows open and the door open and the light inside seemed yellow and warm.  And I could hear the murmur of the visitors talking and then suddenly they all BURST into laughter!    It repeated over and over:  murmuring and murmuring and then BURSTS OF LAUGHTER.

That is Ireland for me.  It was so late at night for a child to be out.  My parents were never up that late laughing when we were at home.  It was just astonishing all around.   This photo too would have to be black and white to capture the night and moonlight and ‘ethereality’ of it.

Next up would be back in Chicago.   Summers seemed so long.  They stretched out in front of us and we made use of very moment.  We spent entire days at the pool.  There were closer pools but they had specific times for swim classes and open pool and adults and what-not.  Whelan was open swim all the time.

Whelan was the very last stop on our bus line.  We actually had to take one bus to the terminal, get off and transfer and take another the rest of the way.  Off we went, little 10-year-olds with out rolled up towels off to the pool.  It was quite the adventure!

The other thing about Whelan — it was in a forest preserve!  All the other pools around were in city parks.  This was a big blue pool in the woods!  And that is how I still see it!  The blue blue BLUE of swimming pool against the green forest preserve trees and the blue blue sky of hot hot days that lasted forever!

No black and white for these photos.  They have to show the blue of summer.

Whelan too represented freedom of going off on our own, leaving the parents behind and taking buses and spending a whole day out there.

But no one can talk about Whelan without remember the sprinkler.  That is THE sprinkler. 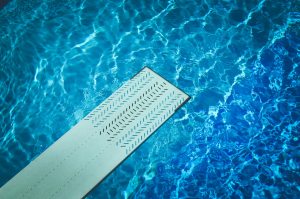 All public pools have the rule that people must shower before they get in the pool.  And no one wants to do that because the showers are always cold.  Well this was back in the day.  Park District and apparently Forest Preserve personnel  were not about to coddle the children.  We had to shower and we were not going to get away with anything.  In order to get to the pool, we had to walk through

The shower seemed to be a block long!  It was ice cold.  It consisted of a pipe above that was spraying down; pipes on the sides spraying at you sideways; and a pile that was about 2 feet [seemed higher] high that was spraying up!  We would wait till the person before screamed and galloped through before we each would take our turn.  It was torture.  We wanted to go as fast as possible so if there were too many people, it would bottleneck!

So you’d have straddle the pipe and run as best you could and just pray you didn’t slip and fall along the way!

I doubt that they would be allowed to have such a shower now.  I am going to have to go back to Whelan and find out!  The shower would be black and white.  Steel pipes shooting ice water at little girls dressed in colorful bathing suits and bathing caps!

Finally, the end of childhood.  Teen angst and teen years, discovering boys and all the woes that goes with it all at Foster Beach.  We didn’t stay on the sand much.  Our spot was “the rocks” just north of the beach.  We took bikes there, we book buses there, eventually we had parent’s cars to go there but long summer days were spent basking in the sun at Foster beach.

It was freedom.  Most of us were working already and this was our time off.  Last summers before college, before real life, before responsibility.  No black and white here!  Blue of water, blue of sky, white of sand, white glare of baking rocks.  Days of summer.  I still hear songs that take me right back to the rocks at Foster Beach.

I have been back there.  It too looks smaller even though I was not any shorter then, than now.  Apart from that is has not changed.

Oh there are many other memories of course and photos – some were taken, some are only in my mind, but these would be the icons of childhood.  What are yours?

Patt is the author of:

BloggerPatt! [just for the fun of it!]

“You are going to feel like hell if you wake someday and you never wrote the stuff that is tugging on the sleeves of your heart;  your stories, memories, visions and songs  — your truth, your version of things — in your own voice.  That’s really all you have to offer us, and that’s also why you were born.”